Skip to content
Home » 2005 » September » 26
Please read the previous post first.
After some time, since the panorama passing by consisted of nothing but water everywhere, we got back inside the ship to explore more of it. None of us had plans to sleep that night. As is obvious, the first thing that strikes us Indians is food. We went around to all restaurants trying to see what they had for our taste. ‘Pizza slice’ was the only thing that came close. After gulping some grub 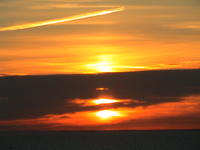 , we went around to the tax free shops to check out what all was cheaper than the mainland. Most things are, including liquor, chocolates etc. After just making a note, we postponed this activity to the return trip, because the sun was about to set anytime soon. Off to the deck we all rushed again. It was quite windy by now since the ship was at high speed. In fact it was so windy that we could barely manage to walk. Even breathing was difficult in that draught. Most people were on the deck, trying to click pictures while balancing themselves against the wind. The sunset was very beautiful to start with but got covered with clouds towards the end.
The moment the sun set down and twilight came, it got even colder. A couple of rather bright stars could be spotted in the evening sky. We all went back inside because on the agenda was a performance in the night club. There was some dance performance going on. At the same time, there was a bar, which had live music with an artist playing the guitar and singing some great rock songs. He was amazing! I could not budge from that place for a very long time, such was the way he strummed and sang. Eventually I realised that I had only as many hours in which I could see everything else. So off I went to the pub, saw the live band there singing some oldies and people trying their luck on ‘black jack’ and roulette. Next to it was another pub which had a karaoke bar. I have always had a wish to go to a karaoke bar and try something there. Though I wasn’t sure whether I would actually graduate from a bathroom singer to a public performer, I checked out the list of English songs. There was another colleague who was quite enthusiastic about the same. We both kept bucking each other up to go and perform. In the end, as expected, the karaoke bar closed down and we both lost our chance. But we were still hopeful of another chance while coming back on the same ship.

Some time later I had a ‘Wet Dream’. 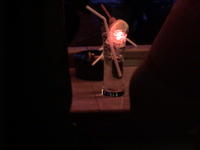 I must mention that it was an Irish cream and vodka cocktail, before you all start getting notions, not fit to be put down here. It tasted great! For the first time I saw some ‘disco drinks’ which had ‘glow stirrers’ which emitted flourescent light and ice cubes which glowed and blinked! It was I who stopped blinking for sometime. After cocktails, everyone was charged enough to go and shake a leg on the dance floor. The night club was placed in a location on the ship which allowed an open view on 3 sides. It was a pleasure to be able to look outside and see the picturesque view float by in the daytime or the glowing lights of another ship in the night. It was during one such moment that we all realised that the orange blob outside the window was actually the rising moon. Again, a rush for the moon took us to the ‘sun deck’. 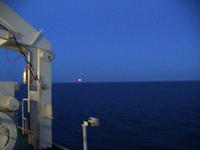 Armed with cameras, a lot of people including us, tried to capture the beauty of the big orange moon, just rising above the ocean. I am afraid, all of us failed, not only because a camera can just not produce the real thing but also because the ship was jerking way too much for anyone to be steady enough to click something. The high velocity wind added to the obstacles. It goes without saying that the long wait for seeing the moon was worth it. It looked like quite the celestial body that it is. The face of the ‘man on the moon’ was also visible quite clearly. 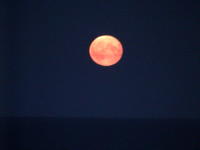 We decided to wait for it to rise further and grabbed some grub in the meantime. Revisiting the deck and braving the freezing wind was again worth it. This time the moon was a little higher up in the sky and was beaming down on water. The orange glow had gone and so had the ‘man on the moon’. The ambience, consisting of the peaceful moon, shining down on a turbulent mass of water, no other sound except the swishing underneath, and no other light except from the moon, was a perfect thing to be experienced. It can give a very lonely feeling and also a very peaceful feeling at the same time.

It was time to go back again since we didn’t want to turn into icicles. To the bar, again it was. Some more music, some more dance and some more guitar. Eventually we decided to call it a day. After all, the cabins we paid for were also meant to be utilised. As I got down to bed, I realised that through the cabin window I could see the full moon again. It reminded me of my flight to Tokyo when I had slept off using 3 empty seats as a couch. In the interim, I had suddenly woken up, looked outside and found the big white moon right next to my window. It felt really close. Of course it was closer by several miles. This view from the ship’s cabin gave me a similar feeling to an extent, of the moon beaming down at me through a porthole, while I slept. I described the same to a colleague of mine on the opposite berth and we both concluded that such nights wouldn’t come again. We could sleep later. For now we wanted more of the moon. Out of bed in an instant, we again went to the sun deck. It looked really eerie now. It was absolutely dark and deserted. There were no lights anywhere at all except for the light of the moon. Everything looked black with just a little bit of white ghoulish glow to it. And of course it was windy as hell. As we took a 360 degree view of the spooky blackness amidst which we were, we suddenly realised we were not alone in that section of the Baltic sea. It took us quite by surprise. There were other ships as well at some distance and not one but many. They looked like pretty little lanterns from that distance. Some were going in the opposite direction and some in ours. It gave us a lot of comfort to realise that there *were* some other vessels at a short distance.

Our attention again went to the mesmerising moon.

As we revisited the bow of the ship and tried to click some more snaps, we realised we were not alone on the deck anymore. Some other people had joined us and it was none other than the rest of my colleagues. It was again quite difficult to take pictures and was freezing cold as well. All of a sudden, there was a dragging sound and a huge mass eerily skidded towards us. It caught my breath. It took some time to realise that it was so windy that a bunch of plastic chairs piled on top of each other had skidded speedily towards us. With enough of midnight adventures behind us, we finally decided to call it a ‘night’. It wasn’t long before Stockholm beckoned us.