On 20th of August, M/s Mariella from the Viking Line sailed for Stockholm, Sweden at 5:30pm from Katajanokka terminal, Helsinki. Aboard were 8 desis excited about going to the land of

the ABBA, and on a cruise at that. One of them was yours truly. Though an indescribable experience, I shall try to put it in words here.

Someone said, ‘Mostly, the quickest and often the best way to do it is yourself’. I sure believe it. Inevitably, it was I who made the bookings for all the ppl. I got two class A cabins booked. This link, though from another ship, shows exactly the same 360 degree views of not only the cabins but also the whole ship. The ship’s departure was at 5:30pm from the Katajanokka terminal (See this google map*).
I had a whole lot of tasks lined up before that. One of them being purchasing a music system which was on sale only till that particular day. After finishing off everything on

my to-do list, in record time, I reached the terminal at 5pm.
We all boarded the ship and as we got in, I suddenly felt as excited as a little girl, looking forward to one of life’s experiences, never experienced before. At the same time I also saw myself detachedly as if from above, (blame it on visuals from the Titanic), entering the ship, realising with awe that it was a whole new world inside – an entire multistoried building complete with restaurants, pubs and discos, casinos and shops, floating on water. The sight of uniformed seamen, gleaming interiors, buzz of activity everywhere, made me truly feel as if I was part of a movie! I only hoped that it wouldn’t have an ending like the movie.
Our cabins were on the 5th deck. After quickly dumping our bags in the cabin using the smartcards which were our tickets as well as our cabin keys, we all rushed to the ‘sun’ deck, where everyone was, to see the sight of the land moving past, our ship heading towards nothingness. On my visit to Soumenlinna island at the beginning of

my sojourn in Finland, we had waved to the passengers going in such cruises. This time it was our turn to be waved at, as we sailed past that island. It gave us a very “sailor” feeling. After having seen the huge full moon during the fireworks display, I was eagerly awaiting nightfall so that I could see the moon again, from the middle of a water body, sans all artificial lights, with the moon beaming down in full glory over the water. Of course, there was a spectacular sunset over the horizon looked forward to, too. I had already checked the weather forecasts, which showed clear skies. We went all around the deck, trying to explore every corner of it. Unfortunately the bow of the ship was forbidden to passengers. But that wasn’t the end of our desire to experience it the way “Rose” experienced it. 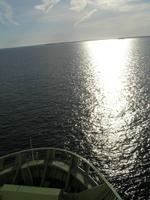 Eventually we found one corner which was considerably in the front of the ship, though not exactly in the centre and not really on the top deck, but one deck lower. It was almost impossible to stand there since the wind was so strong. The sight of a vast sea, your vessel surging forward, with you at the very front is a very different and exhilerating feeling. For miles and miles around there was nothing but water and the sun gleaming on it. I felt very much close to nature.
Continued: Twilight in sunset and moonrise

* – the google map has my apartment (which doesnt exist in the maps) location, the Viking line terminals at Helsinki and Stockholm, marked.