Skip to content
Home » bombing of viapori
On 19th of August was the Finnish fireworks championship. The 1855 bombardment of Sveaborg (Soumenlinna 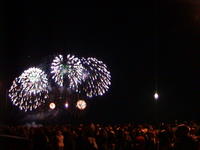 Island) barely touched Helsinki (but for a couple overshot shells), and the population even gathered on hills to watch the dramatic ‘fireworks’. This event refers to the bombing of Viapori, when the English and French navies bombed Suomenlinna (Viapori) while Finns watched on from the hills of Kaivopuisto Park. The best places for watching the Finnish Fireworks Championships are along the coasts of Kaivopuisto and Katajanokka, as well as the end of Hernesaari Island. The fireworks this year started at 10:30 pm, strategically timed with a full moon night. As I prepared to reach the venue I was ‘shell-shocked’ to see the crowd accumulated at the tram stop. For a place like Helsinki, that’s quite a sight. Suddenly there were too many ppl, more than the tram stop could accumulate, forget the tram itself. I realised just how much out of touch I had been with jostling arou 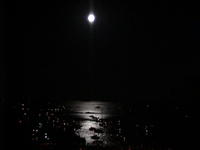 nd in crowds. As the feeling of inadequacy started creeping in, it got overpowered by my natural skills honed particularly by travelling in DTC buses. Out came an arm clutching my handbag under it, the zipped side firmly against my person, my unduly long plait in front of me rather than behind as it has a tendency of getting stuck in zippers (of bags all ye perverts) in the most painful manner. At long last the tram made its way through crowds in its way, to the stop itself. I could see people packed in like sardines. As luck would have it, the tram stopped with its doors right in front of me and I felt like I was drowning in a sea of scurrying (make that jostling) mice. I somehow made it into the tram, well versed with situations like this and held onto the first handrest I could get my hands on. I couldnt fathom just where all these ppl were going. It was unusually cr 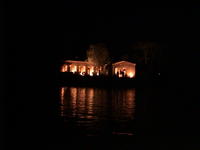 owded even for a weekend, and then I realised that they were all headed to watch the fireworks near the harbour. Unfortunately I had the daunting task of getting off somewhere in between and not at the destination, where I would have just flowed out with the rest of the human mass. Experience has taught me to start making my way much before the stop arrives and that’s what I did. After getting together with some of my colleagues, we all started walking in the direction that we saw the crowds going in.
The harbour looked beautiful, bathed in the full moon light. The water of the Baltic sea gleamed and the *huge* moon peered down. I had heard that the moon is supposed to be as big as a thaali in these parts of our planet compared to the katori in our parts, and I saw it too. Swarms of people crowded around, drinking beer and generally picnicking (something they do a lot, anytime, anywhere). In sometime, the population explosion was replaced by th 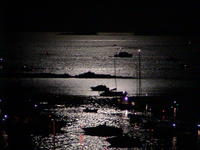 e fireworks explosion. The crowd gasped collectively. “Poor mites”, I thought as I remembered the diwali crackers back home and concentrated more on the huge thaali sized full moon, not so readily available back home. After enjoying the fireworks display, we enjoyed the huge moon and the glistening ocean, by sitting atop a hill in Kaivopuisto Park, far away from streetlights. No photography can justify the beauty of that moment.
Getting back was an adventure in itself. After waiting for about half an hour for a tram which was already more than half an hour late, I decided to walk till the station from where I got my connecting bus at 12:45am, back to my apartment. Anything to get away from that place which reeked so much of beer that I felt giddy myself. I felt as if I had had two cans of beer by just inhaling the fumes all around. Walking ahead, I witnessed a traffic jam at midnight probably because the majority of the population was concentrated at the harbour. I mad 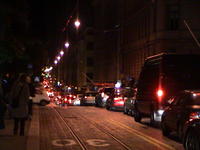 e it to the station, just in time to catch the 12:45am bus. There was a long queue for the bus, full of people acting stupid and drunk. I stood a little distance away from the queue, also wondering how I would ever secure a seat for myself for a 45 minute journey when everyone seemed to be going in that very bus. The bus arrived shortly and for the second time that day, it stopped right where I was standing and the doors opened right infront of me. Amused to the core, I stepped in, before another jostling session would have pushed me in.
After I got home, I reflected back on the full moon glory. The beauty of that black and white moment – the dark water and the bright full moon would remain a memory for all times to come.