Skip to content
Home » night
When I came to Finland, the land of the midnight sun, 4 months back (yeah time sure flows by), all I could see was days and days on end, hardly ever night. The sun would be gleaming bright in our eyes beyond 10:30pm in the “night” and we would be sporting goggles. The “night” or rather a period of almost complete dimming of light (which never really resulted in a black night); in other words twilight, was barely 2 hours long from 1-3 am or so. Sleeping was a pain. Thick curtains was the only way out.

Still being the light sleeper that I am, I would wake up at 4am, 5am etc. only to discover that it was still “night”. The scientific term for this would be “white night“. It took me about a month and a half to see the nightsky at all. Civil twilight is supposed to last throughout summer in regions outside Arctic circle but above 60 degrees North. As a result, the nights are never dark and black. Whereas in India, immediately after sunset, the night takes over instantly, since the length of the twilight is heavily influenced by the lattitude. I had almost started to forget what stars in the night twinkled like. The first time I spotted a star here, which then appeared to be something bright perched on the top of a tree, it was *so* bright and twinkling, that I actually thought there was a sparking going on up there. I would regularly go out for late night walks all the time. At 12am I would set out and get a glimpse of the gradually darkening sky with its various hues. Something like that is unimaginable back home in India. Both geographically and socially. But then I had to be out. After all it was twilight.
It took me another couple of weeks, before I saw the moon out here. Again, the first time I saw it, I didn’t realise what I was looking at. It seemed to merge with the bright street lights at first. Suddenly I realised that this light had a slightly different shape and colour than the regular streetlight. 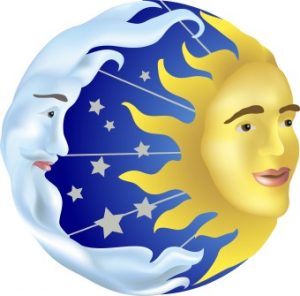 Now I know why they call it a pie in the sky. The moon is BIG and with just that crescent which makes it appear as if someone has hung it out there. I could see why fairy tales depict the sun and the moon in the same frame, as if they coexist! I saw that it is exactly that way here…the sunset doesn’t exactly vanish into the black, inky darkness when the moon is already out with bright little stars. The whole sky seems to be divided into two – one having the aftereffects of a sunset, the other having a black night with a moonrise and twinkling stars.
The sun and the moon both, appear to follow slightly different paths than what we are used to (in India). The sun is never overhead. It cuts a low arc and is mostly near the horizon. Near the North pole, in fact, it is supposed to go around in a circle and never set actually (in the summers). Because of it being so close to the horizon, it’s *really* dazzling, though we are quite used to (in India), the sun being a pinkish-orange ball when it’s that close to the horizon. Again, the moon seems to oscillate up and down in the sky at least back home but not so here. It lies pretty low in the sky and never have I observed so far, the pronounced up and down oscillation (akin to a person nodding his head) in these parts of the world.
Another

phenomenon quite common around the Arctic circle is the Aurora Borealis or the Northern lights. So far, I have not been lucky enough to get a glimpse, though I have been monitoring solar activity on and off. Hopefully I shall see something when I go to the Arctic circle soon.
With time, of course the days started getting shorter (technically after the midsummer eve). About a month or so back, they reached normalcy (according to what I have been used to in India). Though, I noticed that the days were receding *quite* fast. Each day, the sunrise is about 3 minutes later and sunset, 3 minutes earlier. That would mean that on an average we are losing 6 minutes per day. That means that in a month, we would be short by 3 hours! It’s already quite weird to have a sunrise at 8:15am or so. Soon it would be as dark as night at 9am. *shudder*. I am used to seeing a bright moon in the sky at 5pm in the evening courtesy my stint in Japan, but am not used to it being dark in the mornings also. If one outstretches ones thumb and index finger to the maximum and takes them to be the length of the day and then joins them together gradually, it would depict the way the days are getting shorter and the nights are gaining in. Eventually, there would be no “day” left at the point where the thumb meets the index finger. Technically this would happen completely at the Arctic circle, not Helsinki. It seems there’re a lot of seasonal depression related ailments that happen in Scandinavian countries due to the “no light” factor. I hope to be out before the thumb meets the index finger!