Recently I was invited by Datsun India to experience the Hornbill Festival at Nagaland in the Redi-GO 1.0L. Needless to say I was on board immediately, literally. I haven’t explored North East India as much as I would like to and this was a step in that direction. And I was getting to explore the hilly roads from Dimapur to Kohima on road since I personally enjoy driving as well.

So tickets were booked, bags were packed, woolens were worn and off I went one early morning from Delhi to Dimapur. There are a very few flights that service this sector and so we had a layover at Calcutta airport. Once we arrived at Dimapur airport it was a sight for sore eyes! The moment I disembarked from the tiny Air India plane, I could smell flowers in the air and not jet fuel fumes! It was a very pleasant (also literally) surprise. Dimapur airport is a tiny one where passengers get off the plane and walk to the arrivals. On our arrival we were greeted by the local team from Nissan India who were ready with our rides for the remaining journey – 2 brand new Datsun Redi-GO 1.0L cars. And by brand new I mean absolutely factory fresh. The number plates were arranged right then and we were good to go.

Can u imagine an airport like this with such greenery, sun streaming through canopies & a flowery smell in the air? This is the first view one sees at Dimapur #Airport on getting out from arrivals. A brand new @DatsunIndia Redi-GO 1.0L waiting for us. #datsunlove #_soi #travel #travelphotography

We drove till our hotel , Hotel Lake Shilloi, located in the city centre, freshened up and had a late lunch. All of Dimapur was decked up for Christmas and also closed for the same (Quite early for Xmas!) so we couldn’t do much that day. But we needn’t have bothered because we were sitting in the heart of all action. Our hotel was located right next to the city tower and soon a massive Christmas celebrations began. We sat at the terrace of the hotel which was beautifully decorated, to view the celebration from above while the sun went down in to a crowd cheering various Santas.

It was a great evening, hearing local church choirs sing Christmas carols, watching Santas dance and wowing at the chinese lanterns floating away into the sky! There was a night market that had set up right on that road and it seemed like all of Dimapur was right there for the night. Of course we didn’t wish to sample the local cuisine which was more like Intestine chutney and dog meat. However the Christmas decorations and general fervor was great. The celebrations continued late into the night while we had an early morning the next day to drive to Kohima.

The next morning we dumped our luggage in the boot of our redi-GO 1.0L for the drive to Kohima. I was quite impressed by the boot space for a hatchback. The car offers a smooth driving experience, feels light and has the ground clearance of 185mm which is the best in its class. There were 4 of us driving 2 cars, so we took turns driving and exploring the car and its various features. It has good pickup and sturdy brakes. We mostly drove in low gears because it was a hilly drive. And the car didnt stall anywhere. It has a reverse gear that works the same way as in SUV’s (lift the gear and switch it into reverse). That took some getting used to. I noticed that the power window buttons were on the gear box instead of on the doors. That appeared strange and trying to open windows while someone was driving, sort of disturbs the driver.

Driving with the clouds

Here are a few images of the car looking splendid with the hills . It looks quite trendy and suits the pocket just right for those who are buying their first cars because it’s easier on the pocket compared to others.

Had a great drive to the #hornbillfestival in the @DatsunIndia Redi-GO. Good vehicle for hilly roads #datsunlove Nice flares from the phone. #_soi #travel #travelphotography

We reached our hotel in Kohima, Hotel Cimorb around noon , freshened up and left for the hornbill festival immediately. The festival was quite exciting with a lot to do and so much to see and explore. To begin with, the place was full of cherry blossom trees that were still flowering! However they were also full of leaves so the flowers get hidden compared to when the tree has only blossoms. A beautiful sight nevertheless.

We had a quick lunch and set out to explore the festival which is divided into various sections at the Heritage village of Kisama. Kisama is derived from two villages namely, Kigwema (KI) and Phesama(SA) and MA which means Village. The Heritage Complex consists of a cluster of 16 houses – one for each of the 16 officially recognized Naga tribes. All of them are different and unique in their customs & traditions. It also houses food courts, bamboo hall, a church, a World War II museum, kids play area, and areas for various concerts, competitions and beauty pageants. So There are lot of activities to indulge in, ranging from watching various tribes perform their traditional rituals, to watching martial arts, music concerts, checking out local produce and horticulture and much more.

One of the tribals at Hornbill festival 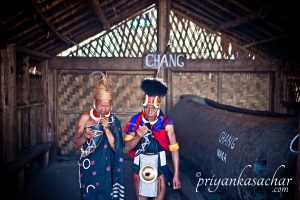 I shopped for some succulents because they are very expensive comparatively in Delhi.

We set back and spent the night at Hotel Cimorb, which is owned by the CM. Kohima was rather chilly at night. The next day we set out very early in order to drive back to Dimapur and catch our flight. The drive back was also smooth considering that the roads between Kohima and Dimapur are really really bad and in a dismal state with a lot of repair work going on. We had our breakfast on the way at the only Vegetarian place I had seen so far, because all I had seen were rice hotels that served rice with chicken , mutton, fish even for breakfast :). Soon we reached Dimapur, handed over the cars to the dealership and headed back for Delhi. If you ask me this was just a taste, and I need to visit Nagaland again soon, to have a full meal.